Whether you’re an art aficionado or not, I think you may find you’ll enjoy some of the art galleries in downtown Bucharest on your next trip here. Entrance is free and I guarantee you’ll be surprised at what you’ll find. I am amazed myself every time I go for a leisure stroll and stop at Artmark or Galateca or Cercul Militar / Military Circle (the latter one where Victoriei Blvd crosses Regina Elisabeta Blvd, close to University Square). I had another favorite gallery on Victoriei Blvd, but unfortunately it closed down sometime this year. Other galleries I invite you to explore are Elite Art Gallery close to Unirii Square and Art Yourself Gallery near Romana Square.

All of these spaces showcase contemporary art, but Artmark also has an impressive collection of 19th-century art (along with collections of various objects they sell at auction) which rivals in many ways that of the National Art Museum (not in size, of course) and is free to visit. So you have nothing to lose; give it a try! Artmark’s building lies close to the National Art Museum, on a street (C.A. Rosetti) which connects Victoriei Bldv to Magheru Blvd.

Here’s a photo from my last promenade in the area, when I caught some contemporary pieces right after the official close of an exhibition. 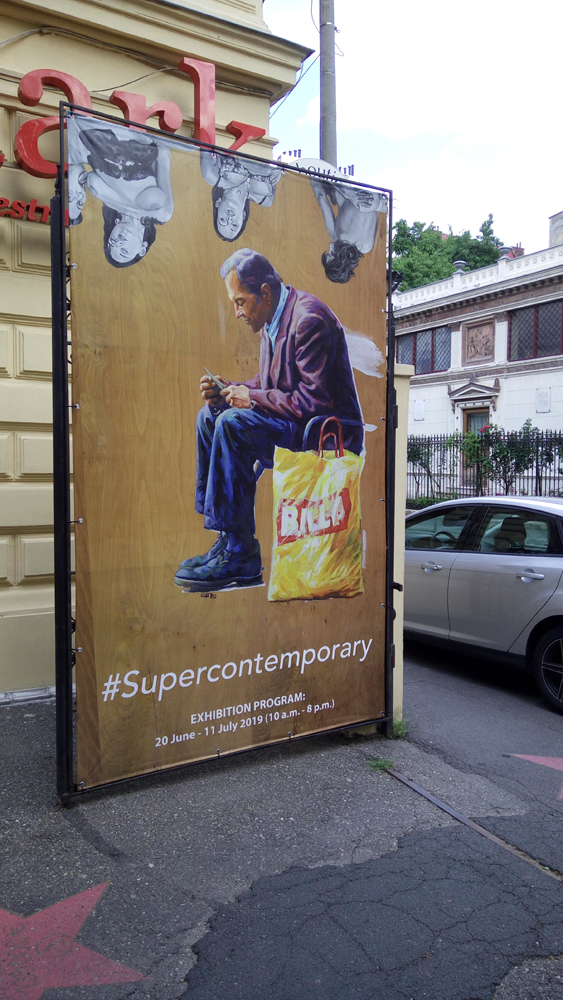 And here’s an amazing piece from yesterday’s walk, when I swung by Cercul Militar and caught a glass painting exhibition by Elena Cioclu. The two images presented here are on show until August 5. My favorite is Golden Dream. It includes not only a cross, a (church) bell and angels, but also an axis mundi (through the cross), a liminal circular area which includes references to vegetation and organic forms, and a spiritual realm where angels support the structure of this world, including by holding on to the edges of the bell (and therefore helping it move in the world). The color composition is also intriguing, with golden, blue, and turquoise hues (which I haven’t captured very well) and with a more intense, orange reddish dot at the center of the cross, in a blue square. This bit is very significant, as it may refer both to the human nature of Christ and to His sacrifice; also to the intensity of the center that holds all things together.

Note as well the circle around the meeting point of the arms of the cross,  which is an ancient symbol of the Sun adopted by the Celts; given that it’s also split in four, it also references, just as crosses do, the four corners of the Earth and the four elements that—at least in Western symbolism—make up this world (earth, water, air, and fire). And if you don’t see any symbols of the Trinity, keep you hair on: the vertical arm of the cross is flanked by three beams on each side, making up a total of seven, which among other things (the seven days of Creation, for one) is said to represent the unity between the Holy Trinity and the created world.

NB: I had to take the photos at an angle because I developed a smudge on my camera lens (can’t fix it) and also this is glass, so I didn’t want my profile reflected in the photos. 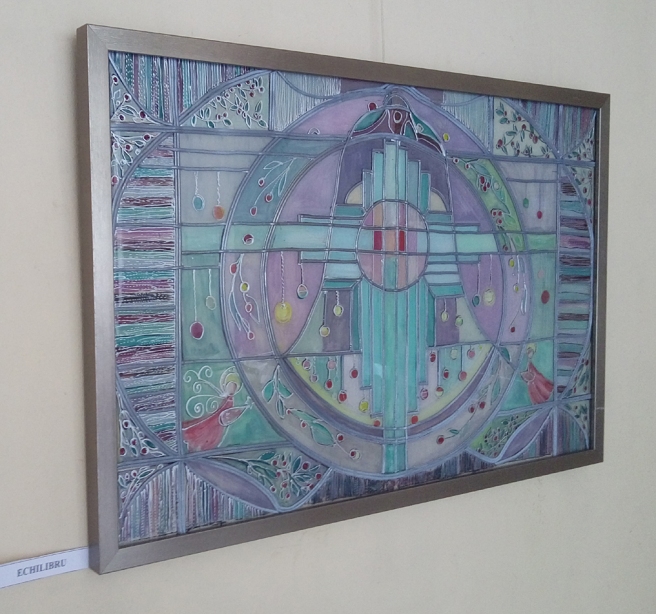 If the above two pieces are too spiritually charged for you, I’ll leave you with a photo of marigolds from nearby Cișmigiu Park 🙂

Chihuly Extravaganza at Kew Gardens
I was lucky enough to see some of his works at a museum. They’re very much alive when you’re in their presence, especially if they’re under natural light.

During the Easter break we were fortunate to have some extraordinarily unseasonable weather – the sun shone, the sky was a bright summer blue and the thermometer rose – so this seemed the perfect opportunity to see an outdoor glass installation by a favourite artist.

The Dale Chihuly Exhibition, “Reflections on Nature” at The Royal Botanic Gardens at Kew is a sequence of artworks, both indoors and nestled within the famous glasshouses. It took a couple of hours of gentle strolling to see them all and to spend time really looking at these beautiful works within the natural environment.

As well as seeing the installations in the garden, we visited the Shirley Sherwood Gallery of Botanical Art (located inside Kew and included as part of your ticket). There is a large exhibition of classic pieces by Chihuly, some of which I already knew. However, I particularly liked seeing his…

“Later that week Anca sent a number of poems to the magazine Literary Romania. “Tell Me” was among them. It talked of roasted potatoes and onions, rooibos tea with honey, and perky sad music on the CD player. It considered whether life is ever more than swapping stories in a kitchen over a poor man’s meal shared threeways, each bite charmed with sunlight and music. It described an intoxicating scene with a long-haired woman in a vaporous dress, pirouetting on the kitchen table to humor her boyfriend, who then grabbed her by the thighs and hips and put her down in front of the piano, where she played God knows what, for she used no sheets, and she and her man were the only musicians in the room. Finally, it mentioned her bare foot pushing the brass pedal with conviction, her launching into Chopin’s Revolutionary Etude, whirling its listeners like a tornado, and her cutting loose as more water for tea boiled on the stove, and the guests were invited to crack walnut shells for a makeshift dessert.”

I love the aesthetics of Lucia Lobonț’s ceramics, whether they be tamer decorative pieces, moody portraits, or mixed-media-informed collage-like compositions with more recognizable use of decalcomania (Here’s an example of the latter.)

I discovered Lucia Lobonț about a week ago at Elite Art Gallery in downtown Bucharest, where she had two portraits and a mirror frame on show. Here’s one of the portraits and part of the mirror.

In the piece to the right, I’m drawn to the economy of gestures in marking shadows and red cheeks, and, of course, the moody tone, set by those wonderful droopy eyes, the chubby chins, the quirkily curved lips, and the full ovals of the faces.

Nika at prettylittlebibliophileweb.wordpress.com has posted a glowing review of Poets, Artists, Lovers: A Novel. I am tremendously happy when my book touches so many chords with a reader, and I’m especially thankful for hearing from readers like Nika who say my book changed their life in some way.

Here’s Nika’s review, complete with many quotes from PAL.

Henriette, an accomplished sculptor, lives for her work and her dalliances—until she loses the one man she truly loves. Ela, a piano teacher, meets dashing Pamfil, a violinist, and discovers the confusing taste of passion. A bittersweet story of love and friendship for fans of D. Nicholls’s One Day.

Most of the works were quite memorable, as I expected. Here are some of them.

Look how these Light Seekers seem to rest on their walking sticks, as if they had found something like Archimedes’s fulcrum (“Give me a lever long enough, and a fulcrum on which to place it, and I shall move the world”).

Alternatively, I see them pointing down from the sky with sticks like diving rods—rods which point us to the light hidden in our earthly lives, under our worries, disbelief, and general lack of interest in higher forms of existence we could embrace . . . if we only paid attention to the many fulcrums in our paths which could help rise us aloft.

Ion Iancuț was born in Răducăneni, Iași county. He graduated from the Nicolae Grigorescu Institute of Fine Arts in Bucharest in 1974.